You might see players walk around with knives, those are just their "crowbars", donors have this csgo knife that acts like a crowbar, it doesn't mean they are the traitor!
On the other hand if you see a red glow then they pulled out a traitor knife and it can one shot you! If their knife has a red aura glow then they might be a traitor! 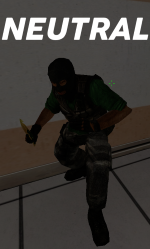 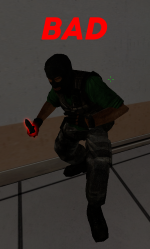 -Plays for the Innocent Team-

Every round there is a high chance 1 of the innocents respawns as a Shinigami after being killed, with a chance at revenge the Shinigami gets a list of the traitors and gets imense speed but draining health, he gets a knife that deals 50 damage but he loses the ability to communicate(He can't use text and voice chat).

-Plays for the Infected Team-

With it's own team the Infected strive in numbers and speed, it all starts with the Infected Prime, being the master of the Zombies he has to build his army by killing Innocents and Traitors alike by either using his Infected Fists or even his weapons.
His minions can also keep Infecting other players and can even win for you.

-Plays for the Innocent/Detective Team-

The sniffer is the same as the normal detective except that it has a magnifying glass instead of the DNA scanner, the Magnifying glass lets you see everyone's footsteps, but beware, those with red on their feet have recently committed a murder.

-Plays for the Traitor Team-

The Hitman does not start the round with any credits, instead the Hitman gains points by killing his target who's name is displayed above their own health bar, he gains 1 credit per target killed. When he kills people the Detectives DNA scanner cannot get any DNA leading back to the Hitman.